BISON will be the headline act at the Wingen Campdraft this weekend.

Melissa Atfield, secretary of the Wingen Campdraft said they are fully booked with competitors and now hoped the bison would draw a crowd to create a fun community event.

“The bison are amazing animals and it is something a bit unique to our campdraft this year, thanks to our president, Ken Neilson that we can put that on,” Ms Atfield said.

“You can run bison continually, they will have quite good breaks in between each of their runs, but bison as a training tool for campdrafting is huge,” she said.

“They are used a lot by trainers to train horses and at schools to learn campdrafting.

“Cattle are a lot faster, so training on bison you can slow the whole situation down so it is easier to train horses on, cattle you don’t get as much opportunity because they are a higher flight animal, where bison are much easier and slow down. 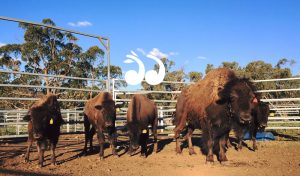 Bison will be a feature at the Wingen Campdraft this weekend.

“The bison are trained as well as horse, they train the bison to go past to where they have to go,” Melissa Atfield said.

With so many campdrafts cancelling due to the drought, the Committee are excited to be fully booked with 165 competitors, generous cattle donors and local businesses sponsoring the event.

“We’re certainly booked to capacity, we’ve tried to include as many locals as we could, but we do have quite a few competitors from out of the district as well,” said Ms Atfield.

“We are forever in debt to our cattle donors, they’ve been extremely generous in such difficult times the drought is certainly taking its toll and we felt as a committee that this draft isn’t going to be the biggest and best that you’ve ever seen,” she said.

“We’ve been so fortunate with the generous sponsors in our community, they’ve helped us put this together and I know a lot of our businesses are struggling in town due to the drought, but they put their hand in their pocket to help us put it on and give something back to the community and that’s really what we are trying to do,” Melissa Atfield said.

The Committee considered putting on meals and a bar, but preferred instead to support a local business during the drought and a courtesy bus can be arranged from Scone by contacting the Hotel.

The canteen will have plenty to offer during the day, with all proceeds going to the Variety Club.

The Committee would like to thank their generous cattle donors including: Balarang station Timor, Ken MacCallum, Johnny Stewart, the Walmsley family and Scone Pastoral.