Flying the Flag for Murrurundi

BRADY Halls and the team from A Current Affair wanted to tell Australia what it is like being on water restrictions in regional towns during a drought and what better place to go than Murrurundi?

The Ferguson family flew the flag for Murrurundi and invited A Current Affair into their home to show Australia how water restrictions impact on country families.

Brady Halls, a veteran reporter for A Current Affair said they enjoyed being back in the Upper Hunter and spending time with locals. 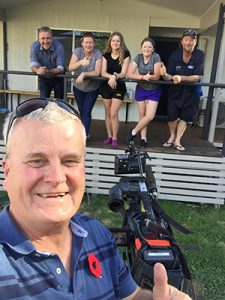 “There are many stories in the Upper Hunter of NSW and ACA has covered quite a few of them over the years bringing them to a national audience of well over a million people,” said Brady.

“We have worked hand in hand with the investigative journalists at the scone.com.au who have their ear to the ground and alert us to local happenings that may be of national interest,” he said.

“Some city folk tend to think it’s difficult on level one or two water restrictions … try living on level six like the good folk at Murrurundi!

“We’re told country folk are stoic … and no where more can that be seen than in Murrurundi where townsfolk have lived on level six water restrictions for nearly 18 months.

“We spent a day filming the lives of the Ferguson family and how they cope living with a small quota of water for each of the four family members.

“The tap water is loaded with chlorine and so everything they drink is from a bottle and they have the two minute shower down pat!

“And washing their hair just once a week might be too much for some city people, but for the Ferguson’s they just take it in their stride.

“Murrurundi is a pretty little town but even the local teenagers say there’s not a lot for them to do.

“The one big attraction in town is the pool, but because of the water restrictions that has been closed for a year now and is home to a couple of dozen ducks,” he said.

“It’s going to be a long hot boring summer for the Ferguson teens this season, but country kids are resilient,” he said.

“We all enjoy going to the Upper Hunter to tell the stories of the wonderful people there and we hope to be back soon to tell more of your stories to Australia,” Brady Halls said.

A Current Affair plan to run the story on Murrurundi this week, we will keep you posted.