First Knock Back for Rezoning

THIS morning the Council’s development and environment committee recommended rejecting the rezoning of land in Phillip Street and to refer the matter back to the NSW Department of Planning.

The residents of Phillip Street and industrial land owners were pleased with the initial recommendation and hope the Council vote to prevent the rezoning at the general Council meeting on Monday, October 28.

Chris Burton, the developer of the Scone Business Park addressed the committee and said Council should not take  “piecemeal” approach to planning, that the proposal flagged uncertainty for all investors in Scone as it meant any land could be “potential rezoned at Council’s whim” and described the rezoning as trying to “squeeze a round peg into a square hole.” 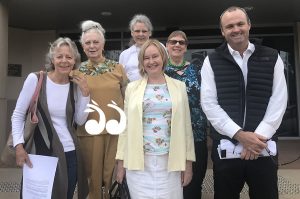 Ms Howie said to rezone was disrespectful to all of the residents who had invested in Phillip Street and there was no reason to rezone the land as there are already other areas set aside for industrial and business use, however vacant residential land in walking distance to the main street was rare.

Dorothy Lim, who lives and cares for her mother Betty Shepherd directly opposite the blocks in question was angry Council were even considering rezoning, questioning why the whole street should suffer to benefit one party.

Ms Shepherd highlighted Council had zoned the land residential, which was a “promise” they had made to the community, but now they were breaking their promise to residents by considering the rezoning.

“If someone has made a bad business decision and taken a gamble on rezoing, let them live with it, not make everyone in Phillip Street pay for it,” said Ms Shepherd.

Ms Shepherd said she did not want to hear Council say that it was not suitable for residential again as it contradicted their own planning in the area, the history of the block which previous owners wanted to build homes on and the new residential investment in the street.

Cr Lee Watts who chaired the committee said there was no independent valuation to prove residents would have their homes devalued, however Ms Shepherd questioned how they could obtain a valuation when the rezoning would allow a broad list of activities and until the activity was known how could a value be properly estimated?

Sally O’Brien a resident of Phillip Street said it was an unfair proposal and questioned why Council had stated in their correspondence that it was to be rezoned industrial, only to find out on Thursday in the agenda for the meeting, that it was now to be rezoned mixed business.

Cr Sue Abbott proposed a motion to proceed to make the proposed Local Environmental Plan and advise the Minister for Planning accordingly, which was seconded by Cr Ron Campbell.

Cr Sue Abbott said she did not think there would be a net community benefit for rezoning and many of the claims made in the Council document, such as there only being five years worth of industrial land available in Scone and Aberdeen were not evidenced and in contradiction to the advice from Burton’s with the land they have available.

Cr Abbott said she believed the proposal was inconsistent with the Minister’s directions and it would not provide certainty for residential, industrial or business land owners in Scone if rezoning was approved.

Cr Ron Campbell said while he was “pro development, but planned development”, he conceded there were other areas available for development and said after reading all of the opposition to the rezoning he believed the zoning should remain residential.

Cr Lee Watts said she had initially supported the rezoning based on the original proposal, but now believes there is sufficient land already available in Scone and no longer supports the rezoning.

The motion not to amend the Local Environment Plan from current zoning and refer it back to the NSW Department of Planning was unanimously supported.