Filed in Just In, Sports Just In by Elizabeth Flaherty March 10, 2020

Born at Raymond Terrace on February 15, 1934 the 86-year-old great grandfather took with him a lifetime of hard work, determination and loyalty after starring on and off the sporting field.

He was a brilliant rugby league player, one of few to be able to play for their State and Country from his then country rugby league club at Maitland.

Indeed such was his ability and talent that he was man of the match on his Test debut for Australia against New Zealand in 1956.

A measure of the man, recounted Scone Thoroughbreds stalwart Mick Reynolds, was that instead of spending that evening celebrating his great and winning debut he jumped on a train straight back to Maitland to the family dairy farm.

“He was up 5am next morning milking the cows,” Mick Reynolds said after the funeral service for a man who had told him the story a few years previous.

“That was Bandy. A very humble person.” 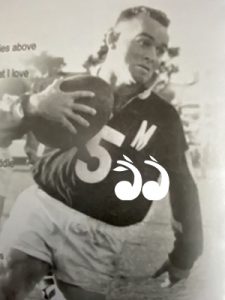 Bandy Adams played his first game for Hinton at Morpeth and then 12 seasons at Maitland where he helped the club win a number of premierships.

It was from there he earned selection in the Newcastle and then Country Firsts sides before going on to play for NSW.

He also played five Tests for Australia, playing three Tests in 1956 and then going on a Kangaroos tour (1956-57). He scored five tries in his five Tests.

Bandy played 191 first grade games for Maitland Pumpkinpickers and was named in their top 20 players of all time. He debuted for the pickers in the 1951 Newcastle Grand Final against Northern Suburbs as a 17-year-old.

In all he played 23 seasons before retiring as a player and then concentrating as a coach.

Garth Harrison played for Scone in 1976 when “Bandy” was coach of the Thoroughbreds.

“He was the best coach I ever played under,” Harrison, who then moved to Tamworth where he played under John Bailey at West Tamworth and won all three Grand Final grades in 1981, said.

Such was Bandy’s coaching success that Scone sides played in 10 straight Group 21 Grand Finals under his care. He also coached Scone Under 18 sides at the same and various times.

Bandy also coached Northern Division (now Greater Northern Tiger) sides and had the Cleal brothers, Les and Noel, who were playing at Scone at the time (and winning a Clayton Cup), selected in the Northern Division side.

A young lock from North Tamworth, Jim Leis, was also in that 1979 side that played and beat the Englishmen at Scully Park.

He remembers Bandy as an astute and loyal coach, as well as one with a sense of humour.

The tour to NZ with the Northern Division under Bandy was a trip he will always cherish and remember with great fondness.

“He was a great coach,” the former Wests, St George and Australian lock said.

After finishing his coaching career Bandy made sure his family all attended home games at Scone Park, son Donald, said in his eulogy.

“Dad had a tremendous love for the town and the Scone Rugby League Football club,” Donald said.

“He made sure he was at all home games to watch his children and grandchildren pull on the blue and white jersey. He was very proud of his family.”

Indeed one of his grandchildren, Adam Clydsdale is now captain-coach of the Scone Thoroughbreds.

The Scone Thoroughbreds also renamed the grandstand the Bandy Adams Grandstand in his honour.

Bandy has also been a great mentor for local players and coaches since his retirement.

“He used to come into the sheds to give us a bit of a talk before big games,” Wayne Hedley recalled.

“You could hear a pin drop when he did.”

Such was the relevance and traditional club spirit pouring out of Bandy. It never failed to spur the sides on.

Bandy was also a multi-talented sportsman.

He loved fishing, shooting and horse riding when growing up and was a champion horse rider with riding wins at the Sydney and Newcastle Shows. He was also a boxer of some note. 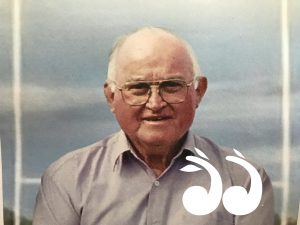 Donald “Bandy” Patrick Adams was farewelled today in Scone and remembered by many as one of the best blokes they knew.

He married the love of his life, Mary, in April 1957. They raised seven children, David, Chris, Donald, John, Jan, Toby and Steven and now have 17 grand children and 19 great grandchildren.

“Dad above all believed in hard work, family, faith and community,” Donald eulogised.

“He worked for the PMG (now Telstra) for 40 years, travelling up and down the valley as a linesman.

“Dad was a very hard worker but always found the time for all of my brothers and sister and took us to all our porting games.

“He was a loving father and a great role model.”