EMERGENCY services have disagreed with Council’s claims Scone airport needs to be certified by August 2020, otherwise “urgent lifesaving medical support from air ambulance will not be provided” and in a “bushfire event the LGA won’t have local support”.

The air ambulance service provider in the local area is contracted by the government for “non-life threatening patient transport”, with air services for “urgent lifesaving medical support” being the remit of the Westpac Rescue Helicopter.

Richard Jones, the chief executive officer of the Westpac Rescue Helicopter has confirmed the certification status of the Scone airport will have absolutely no impact on their continued service in the area. 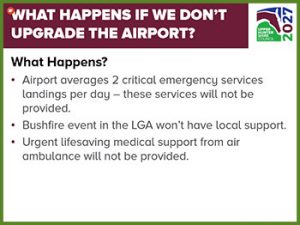 “The beauty of using helicopters is that it allows the greatest flexibility for arriving on scene of critical incidents, be it a paddock, in the Barringtons, on the road or from a local hospital,” said Mr Jones.

“We don’t have to rely on proximity to airports,” he said.

It has also been claimed the Westpac Rescue Helicopter Service often needs to land at the Scone airport for refuelling, which Richard Jones explained was now rarely the case and they don’t require the airport to be certified to refuel.

“In terms of fuel, since we have upgraded to machines with more capacity we don’t have the same need for refueling and because we have machines operating out of Tamworth and Newcastle, in flight terms, we are right on the doorstep for refueling at those bases,” he said.

“I can completely assure residents, that our service will absolutely continue to operate as normal and the proximity to an airport or the certification of the airport has absolutely no impact on our service,” Richard Jones said.

A spokesperson from the New South Wales Rural Bushfire Service has also advised their services will be unaffected by the classification of Scone airport.

“Aircraft utilised by the NSW RFS operating from this airport for bush firefighting purposes do not require the airport to be certified under the regulations referred to,” the spokesperson said.

“Therefore, there is no impact on firefighting response should the airport not be certified under the new regulations,” he said.

The Council has also claimed there are “two critical emergency services landings per day”.

At a recent public meeting at the Scone airport, Mayor Wayne Bedggood, said the government had been surprised there were so many critical emergency services landings in Scone and it had been a key consideration for funding the airport upgrades.

In emergency services, the term “critical” is a specific description used for a category of event or the condition of a patient.

scone.com.au has formally requested the landing records produced by Airservices Australia for Scone airport to confirm if this claim is supported, both in terms of the nature of use and the number of landings, we are yet to receive the reports from Council.