scone.com.au
MENUMENU
InstagramTwitterFacebook
Just In > Covid update: Protesters won’t be tolerated and AstraZeneca for all adults

Covid update: Protesters won’t be tolerated and AstraZeneca for all adults

Police received 10,000 CrimeStopper reports regarding last Saturday’s protest, which Commissioner Fuller described as “an amazing outcry by the community.”

He said there will be a heavy police presence in Sydney this weekend, following online discussions about another protest planned for this Saturday.

“We will be taking the ground very early,” Commissioner Fuller said.

“The community has spoken about that behaviour . . . it won’t be tolerated again,” he said.

More than 98,000 Covid-19 tests were conducted over the past 24 hours, with New South Wales recording 145 new local cases and 58 infectious people in the community. 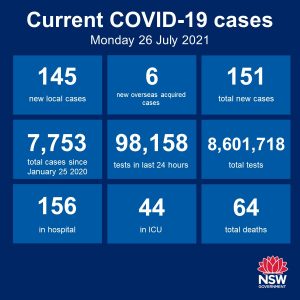 Premier Gladys Berejiklian welcomed new ATAGI vaccination health advice, which now states anyone over the age of 18 can receive the AstraZeneca jab.

“I welcome the revised health advice, which now says all adults can get either vaccine, so please come forward and get vaccinated, even if it’s the first dose,” the Premier said.

“It’s critical as part of our ongoing strategy, in addition to the restrictions, to make that happen,” she said.

Ms Berejiklian said the government will provide an update on the lockdown timeline in coming days.

“We hope to provide announcement or updates to the community in the next few days,” said Ms Berejiklian.

Areas where cases have occurred or have had positive sewerage tests include: Coffs Harbour, Byron Bay, Moss Vale, Goulburn, Marulan and Orange.

A man who was a close contact and was required to self-isolate for 14 days took a Virgin flight from Sydney to Ballina on July 14 and NSW Health is now working to contact everyone on the flight to self-isolate and be tested. The man then travelled into Queensland.

For more information on the lastest Covid-19 case locations and alerts, click here. 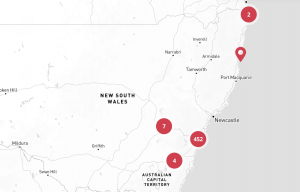