Filed in Just In by Taylah Fellows August 4, 2021
THE Hunter has been put on alert after high levels of Covid-19 were found in three Newcastle sewage treatment plants.
Premier Gladys Berejiklian said sewage detection suggests there could be unidentified cases “up and around the Newcastle area.”
“Concerningly, there were very high rates of virus detected in the sewage in the Hunter Newcastle area,” Ms Berejiklian said.
“The sewage detected high viral load, which suggests there could be undetected cases up around the Newcastle area,” she said.
The virus was found in sewage treatment plants at Burwood Beach, Shortland and Belmont, which serve more than 400,000 residents who have now been advised to look out for symptoms and get tested.
Dr Kerry Chant said testing levels will play a critical role in identifying undiagnosed cases in the Hunter.
“These sewage treatment plants serve a number of areas and we will put those on the website, but in particular we want to call out for all of Newcastle and Lake Macquarie,” Dr Chant said.

“It is critical that we can get those testing levels up to really understand as soon as possible whether there are any undiagnosed cases there so we can make the best public health decisions,” she said.

A woman in her 80s from Sydney’s inner west who died at Royal Prince Alfred Hospital and a man in his 20s from south-west Sydney who died at his home.

The young man was a confirmed Covid-19 case and was being checked daily by staff from the South-Western Sydney Local Health District while isolating at his home.

Dr Kerry Chant said the man had no underlying conditions and “suddenly deteriorated.”

“We are aware that with Covid-19 you can get sudden deaths and I think that is important to understand that your health status can deteriorate and you can have sudden death with Covid-19,” Dr Chant said.

His death has been referred to the New South Wales Coroner. 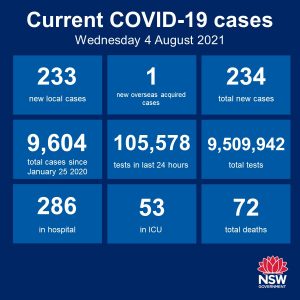