CAMPBELL Jones, who grew up in Scone, won the L’Etape Australia cycling race in Jindabyne on the weekend, the largest road bike race outside Europe and was awarded New South Wales Roadman of the Year 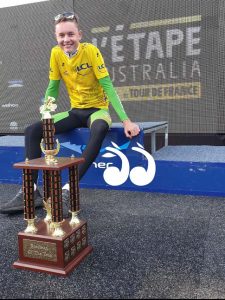 Campbell Jones after his win at L’Etape Australia on the weekend.

“L’Etape is run by the same people that run the Tour de France, it’s got the yellow jersey and the white jersey for the young rider, everyone rides on fully closed roads, it’s really well organised, has commentators from the Tour de France and there are usually about 4,000 people that ride it,” said Campbell.

“This was the first year they had a sanctioned race and that’s what I was in this year,” he said.

“For the NSW Roadman of the Year, there are four races during the year where you accumulate points and at the end of the year they have the overall point winner,” he said.

“This race was the last of the four and going into the race I was sitting third and I needed to finish top three, so by winning, I got enough points to win the overall point score for New South Wales, so that gets me a trophy and a jersey and that was quite a good one as well,” said Campbell.

Campbell moved to Canberra a couple of years ago to focus on his cycling career, but said growing up in Scone gave him the inspiration to chase his dream.

“I’d ride on tracks around Scone Mountain, fire trails in the Barrington and just around the farm,” he said. 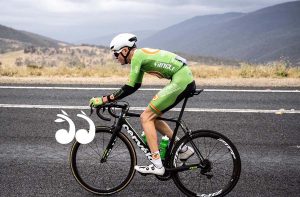 Campbell Jones during the race at Jindabyne.

“About 20 or 30 years ago the Australian mountain bike championships were held in Scone and there are still some of the old tracks they built up there,” he said.

“I got a road bike to build up my fitness for mountain biking, but I enjoyed it so much I flicked the mountain bike and now do road bike.

“There is a really great small group that ride in Scone they meet four times a week at about 6 o’clock and we’d ride out to Lake Glenbawn, over Owen’s Gap, out to Kars Springs and we’d do a loop down to Aberdeen Friday mornings.

“I especially want to thank David Hill, because it was difficult to do the ride, then be ready in time to get to school, so I’d get ready for school at David’s and he’d cook me breakfast each morning, it really was that group who helped me learn about road biking and taught me all the fundamentals.

“From there I got into the Hunter Academy of Sport in Newcastle and they have a great program, with lots of coaching and great advice, which led me to joining the team I’m on now,” said Campbell.

After winning the race on the weekend, Campbell is already already in another race in Tasmania with another cyclist from Scone.

“Scone has actually produced a few good bike riders, one of my team mates who is here Vincent Conway is from Scone and Ben and Sam Hill, David’s sons are from Scone” said Campbell.

“Ben has spent the last couple of years in Europe as a professional cyclist, so Scone has produced quite a few good cyclists, it is definitely punching well above its weight,” Campbell Jones said. 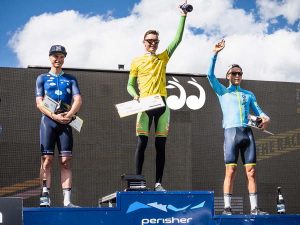 Campbell Jones on the podium at the L’Etape Australia.