Burton’s Weigh In On Rezoning

BURTON’s, which spent $6 million developing Scone’s new industrial area and employment precinct, said they would seek compensation from the Upper Hunter Shire Council through the Land and Environment Court if rezoning of land in Phillip Street from residential to industrial is approved.

The Scone Business Park, owned and developed by the Burton’s, comprises of 50 lots of land, phase one has 12 lots and is complete with another four phases planned. See map of phases below.

In Council’s proposal for the rezoning they claim there is only enough industrial land available in Scone and Aberdeen for five to ten years and “rationalising” the land in Phillip Street was needed for employment.

Paul Burton, managing director of Burton’s Contractors laughed at the claim and said, “there is more like 50 years!”

“We have got years to sell ours and there is land north of the cemetery, so Council saying that there is a shortage in five years is absolutely ridiculous,” he said.

“There is plenty of room there and there is no reason to rezone anywhere else,” said Paul Burton.

Paul Burton agreed with Mick O’Brien’s perspective (read: Rezoning Not Fair Business Play) that if the Phillip Street land was rezoned it would set a precedence for other people rezoning residential land in the township and would devalue their investment.

“If that happens it would hurt us, because like Mick O’Brien, there have been people that have done the right thing and he’s got lots of land too and if they can do it, why can’t he go and rezone his land?” questioned Mr Burton.

“So, it would detract from our estate and devalue it,” he said.

“Why wouldn’t Burton’s go to the land and environment court? We’ve put millions into an investment and we would want to protect it,” Paul Burton said.

In terms of the land proposed to be rezoned, Paul Burton had several concerns including the size of the land and heavy vehicle movements.

The land proposed is 2,690m2, which Mr Burton describes as “small”.

“I think one of the comments made by Mick O’Brien, is that they will have a lot of trucks and vehicles parking in the street because you need to have a suitable on-site parking area,” said Mr Burton.

“Often people need bigger lots, because when you have semis coming in with big parts on them; what is illegal to do, which you see happening in a lot of industrial sites, (is) they park out on the street and run their fork lifts out onto the street to lift the equipment off the truck and that’s what we don’t want happening,” he said.

“Even though they have to have big truck turning areas, people start putting stuff everywhere and the trucks can’t get in and there are pallets everywhere so they end up truck pulls up on the street and they go out and get it and that can be half an hour causing a bit of havoc,” he said.

“If they keep their yard spotless, but it doesn’t often happen, it starts to fill up and that’s the nature of things, I’m not saying this guy will do it, but you often see it in industrial sites on the smaller sites,” he said.

“He (Hamish Le Poer Trench) has said he wouldn’t on sell it, but he could resell the land once the rezoning is done and turn over some rezoning lots and then it is up to the Council to approve what is on there and you don’t know what you are going to have,” he said. (Update: Mr Le Poer Trench does not own the land in Phillip Street. Please read:Setting the Record Straight.)

“When you have industrial land next to residential there are lots of protocols you have to consider such as fire walls and set back from residential area, which will decrease the size of the workable land,” Paul Burton said.

The Scone Business Park has been built to industrial use specifications, including wider roads for heavy vehicle access, reinforced roads to cater for heavy use and three phase power, “It’s all new and ready to go,” said Mr Burton.

The representative for the proponent of the rezoning, Mr Le Poer Trench said the Phillip Street blocks were more suitable for his business than the Scone Business Park, because of prominence for potential clients accessing the industrial area.

Mr Burton questioned the perspective in light of the new access planned for the industrial areas of Scone from the bypass.

“With the set up they have now, one of the comments made was that our lots weren’t accessible, but it will have a local road, there will be a roundabout which will allow people turn off into a road onto our estate and that roundabout will pick up local traffic as well, so they won’t have to go on the New England Highway through town to get to the estate,” Mr Burton said.

“Originally the bypass was to happen past our estate, but we protested and the RMS redesigned it…” he said.

Council has also claimed in their proposal for rezoning that the Phillip Street land is needed for employment, although Phillip Street is not part of the employment zone identified in the Local Environment Plan.

“It’s an odd thing to say, because the Council premise was (the new industrial estate was) the Scone employment zone and that’s what they got the funding for from the government I believe at the time, to spend some money to get the services in and fast track it,” said Mr Burton.

History of the Scone Business Park

The Burton family were actively pursued by Council 12 years ago to develop the Scone Business Park.

“It is confusing, the Council at the time, nobody was buying the land, it was on the market for a while and then we came along and Council were so in need of a developer they actually drew up the rezoning application themselves,” said Mr Burton.

“They wanted the employment zone to go ahead and one of the things they were on a timeline, because the government were giving grants and the Scone Council got a grant to extend utilities like water to our property boundary, so they got government grants from it, they wanted to fast track it and make sure it all went through to create the Scone Business Park to create an employment zone so they were all for it,” he said.

“…we had a look at it and we knew it wasn’t going to be something like a big city investment which would return in five years or three years, we knew this would be a long term investment,” he said.

“We’re civil contractors and we build a lot of sub-divisions for other people, but this was one we’d thought we’d take on ourselves and see how we’d go and as it built up we could just keep extending the roads and that’s the plan,” he said.

The Scone Business Park has been operating for 10 years, with fewer than half a dozen blocks sold due to the uncertainty surrounding the bypass and changes to the mining economy, but Paul Burton said with the bypass almost complete, there are more enquiries for the land.

“Now that the bypass is almost done and there is access off the round about to allow heavy vehicles to come straight into the estate we are getting more enquiries from developers,” said Mr Burton.

“We are open to negotiation, we aren’t overpricing the market, because we want to attract people in and we have been quite reasonable in what we are asking to get a few more happening to have that snowball effect,” he said.

“Once people start coming in, other things like factories and warehouses and goods stores will open up,” Mr Burton said. 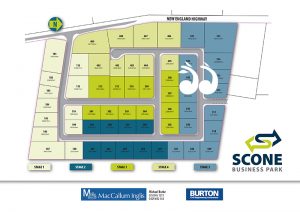 The staged plan of land in Scone Business Park.

« Weather: The Week Ahead
Literary Festival Gets Lit »