BRIAN Debus was the Australia Day Ambassador in Murrurundi today a Local Hero and former principal of Menindee Central School. As a teacher he found a passion for Aboriginal education and taught in Wilcannia and throughout regional New South Wales before moving to the coast where he could get back to his hobby of surfing.

After completing his Masters of Educational Administration in Narooma he established a local theatre group to challenge the cultural scene, directing and acting in plays. Retiring in 2002 he was enticed back to teaching to Menindee in 2005 to a school was was seen as ‘failing’ but in seven and a half years turned the school around to have 100 percent of students gain the HSC, 80 to 90 percent of students receive a trade training certificate and work one day per week, 80 to 90 percent were fully employed withing 12 months of leaving school and gave every student the opportunity to travel overseas with school trips.

Brian again retired in 2012 and established a City-Contry alliance covering 58 schools joining rich schools on the north shore with isolated country schools. Brian conducts an annual leadership orgram for Year 5 and 6 and Year 11 and 12 students and continues to enjoy surfing and snow skiiing. 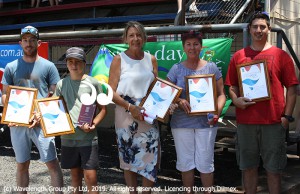