THERE have been more than 130 joeys born at the Aussie Ark this breeding season, marking the most successful season since the Ark opened in 2011.

Tim Faulkner, president of the Aussie Ark, said the team is over the moon with the bumper year of parma wallabies, Tasmanian devils, eastern quolls and bettongs, which will all build insurance for the threatened native species.

“Australia is in the midst of a crisis with one of the highest extinction rates in the world, and it’s only with the support of the community that organisations like Aussie Ark can make a difference,” said Mr Faulkner.

“We face a world without our unique Aussie animals if we don’t act now so we’re asking all Aussies to dig deep and help us ensure a future for our wildlife,” he said.

The Aussie Ark is encouraging the community to adopt Aussie Ark animals for $25 a month: Aussie Ark. 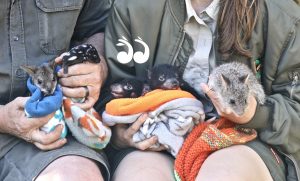