THE 67 year old man who was critically injured in yesterday’s truck incident in Singleton is now reported to be in a serious but stable condition.

The man was one of eight people who sustained injuries from the truck collision near Burdekin Park in Singleton.

Carolyn Carter, a Scone resident, was one of the first people to encounter the truck driver as she drove through Aberdeen and was later run off the road in Muswellbrook.

“The man had actually passed me in that truck back in Aberdeen, he passed me you know where the Top Pub is there and you go down the dip, between Eldon Street and Perth Street and I suddenly became aware of this truck hooting along passing me and there was a car coming in the other direction and I moved over as did the car in the other direction, so I was aware and thought it was terribly odd that there was a truck going like that, going fast,” said Ms Carter.

After being overtaken by the truck in Aberdeen, Carolyn said was surprised to see the truck behind her again as she was driving south bound past the Muswellbrook TAFE. 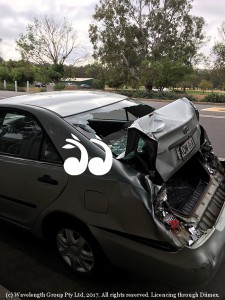 Carolyn Carter’s Toyota Camery which was allegedly rammed by the truck in Muswellbrook.

“I thought he was ahead of me but he must have gone straight ahead there at the lights where the pub is and gone around the side streets or something because then he was behind me,” she said.

“There was another vehicle in the left hand lane with half a house or something like that on it and I was only doing 40 because it was a quarter past eight and it was a school zone, so fairly slow.

“I was just driving along and the first thing I knew about it was this huge ‘bang’ and I was hit and my car went across the medium strip but was going down the other side of the road in the wrong direction and fortunately there were no cars coming that were near me and my car came to a standstill eventually,” she said.

“There were police parked up in the TAFE obviously waiting for him to go past so they could monitor him and they drove out and saw me and they stopped and took my details.

“There was no chase there were just a lot off police cars around observing obviously.

“When I came to the traffic lights there at the hotel to turn left to go down to Singleton, there were a couple of police cars there and I thought it was a bit unusual.

“The police told me when they took my details that they were going to try and get some road spikes on the road at Singleton and I thought ‘well let’s hope that stops him’ but it’s a shame he went so far after he ran over the spikes,” she said.

Carolyn was shaken but thankful she was not injured and maintains some humour.

“I’m going along alright, I was very, very lucky in view of what happened down at Singleton it was just diabolical,” she said.

“I was going to get a new one (car) and I was wondering what I was going to do with the old one, but I won’t be doing anything with it now, it solved that problem for me,” mused Ms Carter. 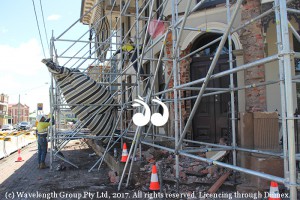 The 1848 building which was allegedly impacted by the truck yesterday.

Lisa Redmond lives in the 1848 building in Singleton which was impacted by the truck and said she was glad none of her family were home when the incident occurred.

“I am just glad there were no school children at the bus stop out the front, there are usually lots of children around here with the schools and it could have been worse if he ran into the petrol station across the road,” she said.

“When we first saw the scene there was just lots and lots of diesel all over the road, which they have cleaned up today” she said.

“The house is completely original inside and out and there have only been three owners since it was built,” she said.

“We have lived here for seven years and we have done some work on the building, I am just glad it didn’t impact the structure of the roof,” Ms Redmond said.